Neville has been involved in hunting most of his life and this is a major passion of his. He has hunted all over the world and he has been involved in Game Animals (not only the hunting side of things but in research and relocation of animals) including live capture of big horn sheep at Antelope Island, Salt Lake City, USA. He has studied Elk Genetics in Canada and the import/export of live animals from Canada, USA and China. The results of some of these endeavours can be measured by the amont of world record trophies that have been taken from Mt Cook Safari Park and other parks in NZ.

About 20 years ago when Neville lived in the deep south of NZ he went on a Tahr hunt to the Mt Cook region and automatically fell in love with the area. After his travels around the world and seeing other hunting programmes and what was involved, he knew that Mt Cook would be the best place to set up his Safari Park in New Zealand, because there are few places in the world that encompass the game, the diversity of terrain, the remote environment and the awe inspiring views that Mt Cook can. 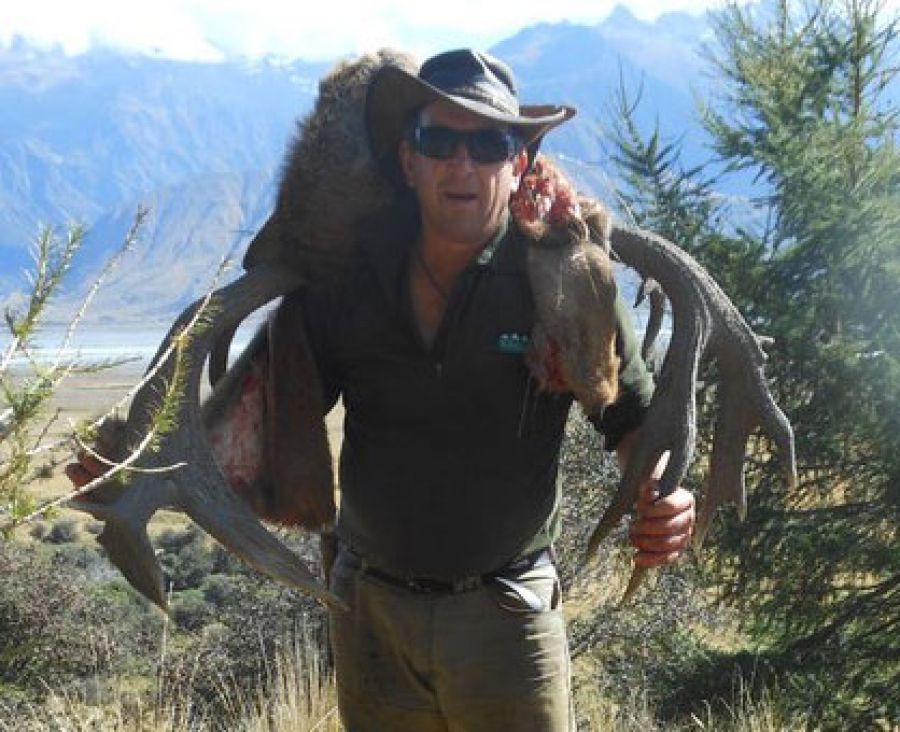 That dream and vision that Neville had all those years ago has now turned into reality. Mt Cook has produced some of the largest estate hunting available in New Zealand now encompassing almost 8000 acres of mountainous terrain with the most panoramic views in the Southern Hemisphere. We also back on to and hold concessions for the famous Mt Cook National World Heritage Park where we carry out our free range and helicopter assisted hunts, which, because of the distances and ruggedness of the terrain are ideal for the younger, fitter hunter.

Our Safari Park is right in the heart of the Tahr country, in fact, we are only 5kms from the original liberation in 1906, with an abundance of Red Stag, Elk, Fallow Deer and the quality of the trophies is getting better every year – the result of 20 years of selective culling.

Nev Cunningham points out good spots to the man with the glass – click to enlarge.Neville still gets the adrenalin rush from every hunt he undertakes which is why he will personally take the hunters out himself when he can. He tailor makes every hunt with the clients’ needs in mind to ensure that they receive the best experience possible. Neville personally likes hunting Tahr because it is in the open, clean, alpine country were you get an opportunity to glass the animals well before the hunt.

My rifle of choice for Tahr shooting is the latest acquisition, a Weatherby 300 magnum equipped with a Zess scope. I have also used the .50 calibre Blackpowder Ultimate Firearm, muzzle loader to take Red Stag, Chamois and Tahr this season and I have since purchased two of these firearms to enhance the range of services that we can offer at Mt Cook Trophy Hunting (these are available for hire by arrangement).

Neville and his team love to entertain and build friendships with their clients and ensure that the well renowned NZ hospitality and Kiwi experience is alive and well. Contact us now and share a unique hunting experience you will never forget.

A unique, once in a lifetime hunting & touring experience